The director ensemble “Rimini Protokoll” re-enacted this mammoth-scale drama of diplomacy in the play “Weltklimakonferenz” (World Climate Conference) in the “Deutsches Schauspielhaus” theatre in Hamburg, Germany. Since the opening night (21st Nov. 2014), the play had been performed 16 times, reaching an audience of over 9000. All performers in the play were experts and scientists at different stages of their career, including Ph.D. students, journalists, and professors. Each spectator took on the identity of a delegate of one of the 195 participating countries, distributing the 700+ participants per show into teams of 3-4. In a nutshell, the play went as follows: after an opening ceremony, the audience was divided up into seven groups, each of which was given advice by experts in several different briefings. These informed on country-specific challenges caused by the social and economic situation, possible future climatic changes and negotiating tactics. In addition, the delegations had bilateral meetings, enabling them to exchange views and experiences with one another. Towards the end of the play, each delegation was asked to submit a national commitment to greenhouse gas reduction and a financial contribution to the Green Climate Fund. Based on these national commitments, the final plenum revealed whether or not the delegations had managed to submit reductions compatible with restricting global warming to 2°C compared to pre-industrial times.

- convey the full complexity and challenge of a climate change conference, specifically the fact that most countries have rational reasons to be either more “pro-climate mitigation” or less;

- information and education about climate change;

- making it possible for the spectators to experience and grasp the effect of climate change (e.g. spectators of countries threatened by an increase of droughts and heat were heavily floodlit from a floodlight that was specially designed for the play to simulate the increase of heat).

Beneficiaries: society as such and in particular young people

Society is fatigued by the ongoing news about climate change and adopt an attitude of ‘I cannot change anything’.

The play proposed an innovative way of conveying what climate change means for different regions of the world. Each spectator took on the identity of a delegate of one of the 195 participating countries. Due to their direct personal involvement in the play, each spectator was confronted with the full complexity and challenge of a climate change conference and they were keen on learning more about the vulnerability of their country due to climate change and were encouraged to ‘think outside of their box’ what climate change means. They were forced to think about their new country’s options and policy environment. Based on the national commitments of the spectators, the final plenum revealed whether or not the delegations had managed to submit reductions compatible with restricting global warming to 2°C compared to pre-industrial times.

The awareness raising in terms of climate mitigation at the local level and the role of the civil society was huge.

The play performance reached an audience of over 9000. More than 50 school classes together with their teachers participated in the play and thus made the topic of climate mitigation but also adaptation a subject of discussion in class. Due to their direct personal involvement in the play, each spectator was confronted with the full complexity and challenge of a climate change conference and subject as such: revealing the "culprit" - in other words, the causes of climate change – it is all about facts. In contrast, when developing options for action against climate change, the matter at hand are ultimately values. Based on feedback from spectators, the performance managed to convey the complexity of the topic and the spectators started to develop ideas on how to mitigate climate change.

The current setting of the play is designed for an audience of 700 spectators per performance moving around between the plenum and six thematic rooms and with a duration of 3 hours.

The play is in German but the general concept could be easily translated into other languages and adopted by local climate communicators. Given the usual media awareness around climate conferences, an adaptation of the conference might be useful in the near future, for example in 2023 for the First global Stocktake. Additionally, it could be extended to become an online based material basis allowing local organizers everywhere to develop their individual climate conference at any scale, given sufficient funding.

Some aspects have already been translated into school materials for UK schools, i.e. for groups of 30. 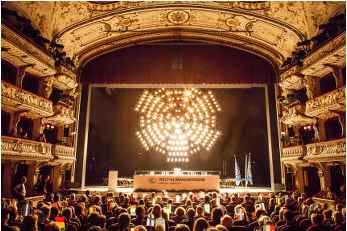