The Put A Price On It Campaign - Best Climate Solutions

As natural disasters ravage communities across the globe, it is increasingly apparent that bold action on climate is needed. Putting a price on greenhouse gas pollution is an indispensable step in decarbonizing the economy and securing a safe and healthy future for generations to come. In order to win federal climate policy, states must serve as laboratories of democracy, proving that carbon pricing is effective and politically durable. Many states are actively considering proposals: New York, Massachusetts, Vermont, Rhode Island, Oregon, Washington, and the District of Columbia. Passing these bills will require targeted, vigorous, and sustained organizing. Empowering young people to advocate for these policies will energize existing efforts and accelerate the pace of legislative success.

Our Climate is poised to take on the challenge as a millennial-led organization with a proven record of training, mobilizing, and empowering young people to advance carbon pricing campaigns in states across the country. In the summer of 2016, Our Climate launched the national Put A Price On It campaign in partnership with the National Geographic documentary series, Years of Living Dangerously. The campaign blends grassroots organizing, leadership development, and high-impact communications to build political will for carbon pricing and empower the next generation of climate champions. The campaign has trained dozens of student leaders from 110 campuses to initiate and lead carbon pricing efforts. Through media partnerships, Put A Price On It amplifies the stories unfolding in leading states, strengthens coalitions, and energizes elected officials to pass bold legislation on the state-level. Young people are powerful spokespeople in the movement for climate action. As Massachusetts State Senator Barrett told our student leaders, “If Senators and House members are going to do the right thing, it’s because you will have provided the pressure and the grassroots force.”

The Put A Price On It campaign is building a movement to achieve the following objectives:

Goal #2: Empower a growing base of racially, ethnically, and socioeconomically diverse young leaders to advocate for strong and equitable climate policy.

Since our organization was founded in Oregon in 2014, our team has demonstrated the potential for creative, youth-led organizing to make carbon pricing a priority among legislators and the public. Our team organizes collaborative community art projects, creative videos, and social media projects to build a diverse base of support that we turn out to attend hearings and meet with legislators. The voices of young constituents help drive momentum towards concrete legislative victories.

Carbon pricing is a powerful policy tool to reduce greenhouse gas emissions. By internalizing the costs of fossil fuels, carbon-based energy becomes more expensive, thus providing a financial incentive to conserve resources and transition to clean energy. The “price signal” created by a carbon price encourages emission reductions, affecting short and long-term decision-making to transition our economy to clean energy. Carbon pricing is a near-term, viable, and impactful tool in the fight against rising global temperatures.

Our Climate empowers young leaders across the country to contribute to state-level campaigns to price carbon while sharing their stories through film, social media, and opinion pieces. Our partnerships with media and film organizations enable us to reach a wide audience and build political will for comprehensive climate policy. Our unique blend of youth-led organizing and high-impact communications is powerful and undoubtedly the strength behind our campaign.

Regarding Our Climate’s contribution to greenhouse gas mitigation efforts, when we combine the Carbon Tax Center’s estimates for state-level emissions with independent research studies on the impacts of modest carbon taxes in these states (roughly $30/ton), we estimate that Our Climate’s state-focused campaigns have the potential to directly reduce national carbon emissions from BAU levels by approximately 43 million metric tons (MMT) of CO2e by 2050.

These short-term state-level wins will lay the groundwork for national climate policy. A strong federal level carbon price will significantly reduce carbon emissions and help to mitigate the worst effects of climate change; a Resources for the Future brief found that “under the carbon fee scenario [at $45 per ton of carbon emissions], emissions in 2030 are projected to be 64 percent of the business-as-usual baseline—that is, emissions fall almost 36 percent from 2016 to 2030.”

Over the past two years, we have proven that our youth-led campaign to price carbon is scalable. Our Climate, founded in 2014, was initially focused on advancing state-level carbon pricing policy in Oregon. After being approached by state and national partners who were excited about our work mobilizing young people around specific state-level climate policy, we realized that our approach was unique, and increasingly important, given the lack of climate action on the federal level. In close partnership with Years of Living Dangerously and state-based organizations, we decided to explore what it would look like to take our organizing model to other states and combine it with high-level communications. Since then we have empowered students on 110 campuses to advocate for strong climate policy and secured endorsements from more than 40 college and university presidents. We have energized state-level efforts to price carbon and find that our organizing model is powerful and effective. 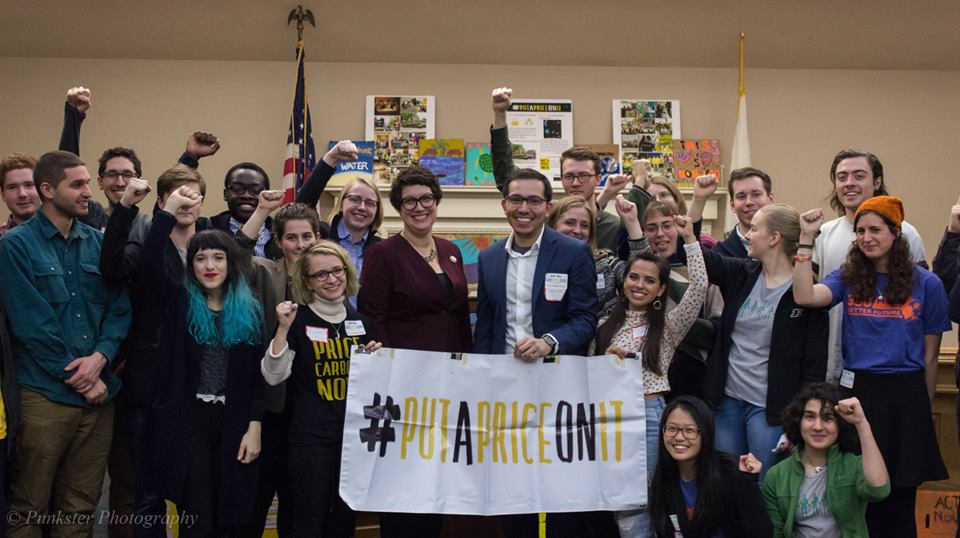