The Future We Don’t Want highlights the critical climate risks that cities, and their residents, are currently experiencing and will experience in the future as a result of climate change under a Business-as-usual scenario (the so-called RCP 8.5 climate scenario).

The project traces global climate projections and looks at how many people in how many cities that will be impacted across six vulnerabilities: heat extremes, sea level rise, water availability, urban food security, energy supply as well as extreme heat linked to poverty in developing countries.

By the 2050s, billions of people in thousands of cities around the world will be at risk from climate-related heatwaves, drought, flooding, food shortages, blackouts and social inequality without bold and urgent action now to reduce greenhouse gas emissions.

The reason for picking a worst-case, higher end of the IPCC business-as-usual emissions trajectory, is because city representatives commonly inquire about what the worst possible outcome for their city will be – given today’s emissions developments.

Knowing what will happen if worst comes to worst helps to set urban policies and actions in perspective. It also speaks to cities’ need of heeding the precautionary principle of designing adaptation and resilience policies for dire scenarios. Looking at the consequences of a possible high-level climate scenario can, therefore, inform a city’s cause of action as well as the speed of action: on both adaptation and mitigation.

The project also looks at urban climate change solutions, in order to both show possible impacts as well as encouraging action. Based on interviews with city officials and academic experts, the project highlights concrete examples of bold climate solutions that cities are delivering at the moment to deal with for example extreme heat or draught, which, if adopted at-scale, could safeguard urban residents and help prevent the worst impacts of climate change.

By analyzing the urban vulnerability to climate change, The Future We Don’t Want aims to generate an awareness around what cities will be facing by mid-century - if we don't take drastic action to reduce global emissions now.

The research also showcases regional impact hotspots along with tangible examples and stories from cities that are investing in solutions to build resilience in the face of these risks. These narratives are written and presented in an accessible article format that summarises the technical results for a local audience.

With such narratives, we opted to tie each area of risk to specific urban case studies that outline proven solutions for a particular climate hazard (heat, drought, sea level rise etc.). The idea is to translate global, high-level scenarios and figures, that city stakeholders may consider abstract, to concrete examples that local actors can relate to, with the aim of inspiring mitigation and adaptation actions in cities across the world.

Our communication approach is aimed at layering information in a way that first pulls a reader in through global impact figures, that are directly relevant to supra-national organizations and the global business community.

Then, it is possible to dig deeper and get regional/national impact information. This step is imperative in capturing national governments’ attention - and support for local adaptation efforts.

However, to be relevant to cities, the impact figures are also translated into tangible examples of climate impacts and solutions that are happening now around the world through local case studies.

All this information is accessible and flexibly packaged; allowing readers to get technical and non-technical information through a methodology report, article-like narratives that can be read on the go, a short video summary, succinct audio interviews with experts and infographics produced for social media.

- 1.6 billion people living in over 970 cities, will be regularly exposed to extreme high temperatures.

- Over 800 million people, living in 570 cities, will be vulnerable to sea level rise and coastal flooding.

- 650 million people, living in over 500 cities, are at risk of declining water availability.

- 2.5 billion people will live in over 1,600 cities where national food supply is threatened by climate change.

- The power supply of 470 million people, in over 230 cities, will be vulnerable to sea level rise.

The results inform cities of the consequences of a high emission scenario. This, in turn, makes the case for why urban leaders should take action today: to reduce emissions as well as increase urban resilience to climate change.

To generate engagement, the project provides multiple entry points to the information and multiple uses of the outputs. If you are interested in the methodology and data sets, there is a technical report. But if you are a busy policymaker, it is enough to read the articles that summarizes the results; supported by interviews and tangible case studies. These articles can be accessed on your smartphone and read on the go. If you don't have time to read, you can watch a short video online. If the video is too long, impacts and solutions are presented through infographics.

Content flexibility also serves a second purpose, allowing readers to organically disseminate the findings to scale up the solutions. Readers can freely pick what combination of information and sources they want to include in their own work, presentations, tweets, and talks. Figures from the technical report, arguments from the narratives, case studies, glimpses of a video, snippets of audio or colorful visuals.

Name: The Future We Don’t Want – How Climate Change Could Impact the World’s Greatest Cities
Category: Adaptation & DRR
in one sentence: The Future We Don't Want shows how many residents, living in which cities, that will be threatened by direct and indirect climate hazards by the 2050s if global greenhouse gas emissions continue unchecked. 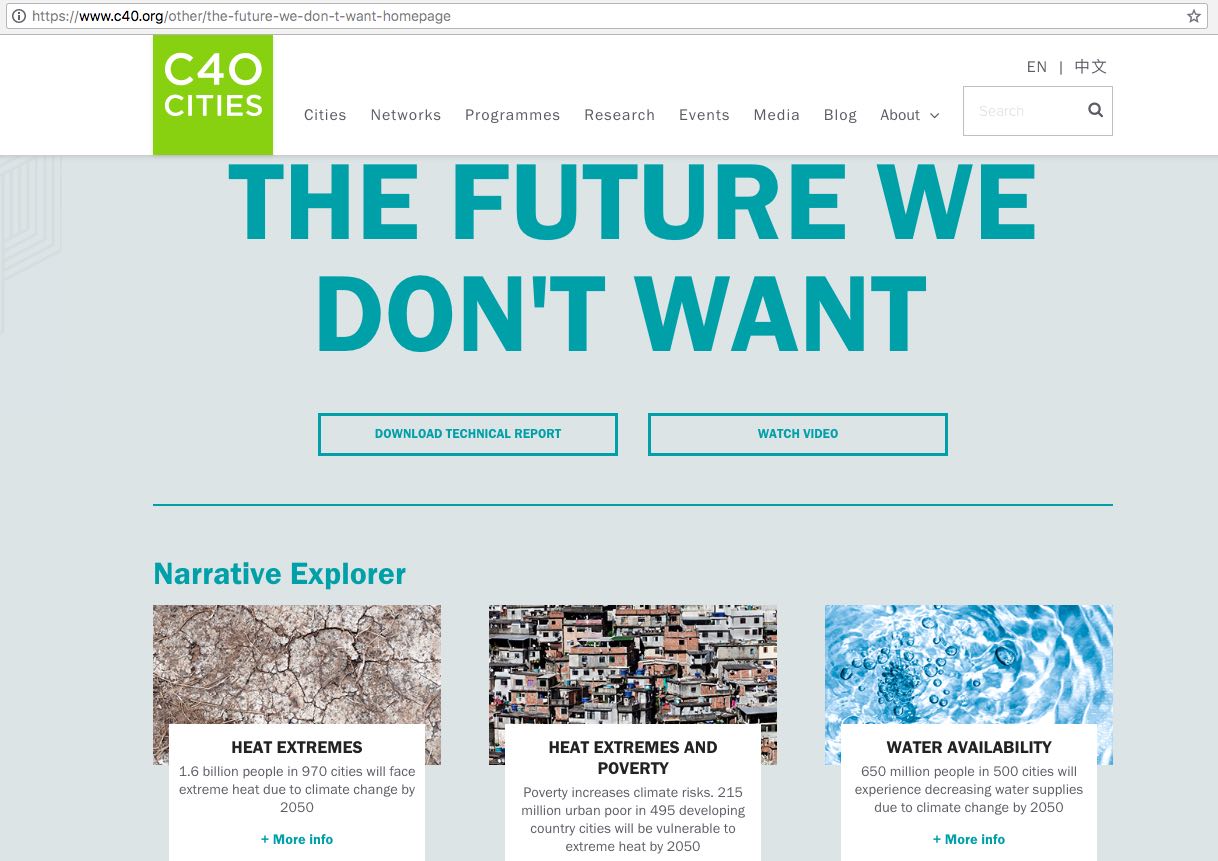