The climate solution on our plates: Getting animal agriculture onto the global climate agenda - Best Climate Solutions

At ProVeg, our mission is to reduce animal product consumption by 50% by the year 2040 (50by40). In this effort, we targeted a series of influential groups at the 2017 UN Climate Change Conference, COP23: national delegates (senior ministry officials, negotiators, and politicians), UN officials, international media, and civil society organizations. We ran a petition, to give the public a voice in the lead up to COP23. The petition, with over 65,000 signatures, was addressed to the German government, as the co-host of COP23, asking them to put the climate impact of animal agriculture onto the negotiation agenda and into national-level strategies. Additionally, we produced a video, featuring the famous psychologist and advocate Dr. Melanie Joy, to highlight the issue of animal agriculture’s impact on the environment, and to create public awareness and pressure in the run-up to COP. This video was shared on social media and received close to 60.000 views on Facebook and Youtube, across 5 European countries.

It was also broadcasted for 2 weeks at the exhibition area of COP23 itself. Moreover, we hosted an official event at the COP23 venue as well as for a week-long exhibit alongside the national pavilions. This event, entitled “Reducing Livestock’s Long Shadow” took the form of a panel discussion of the world’s leading experts on food and climate. We were the only official event on the COP23 agenda addressing this issue and the only NGO in this field with an official stand in the COP23 exhibition area for 2 weeks. We filled a knowledge gap among the public, media, and policymakers and are now the lead organization for the issue across countries as diverse as Poland, Spain, and South Africa.

Watch the video produced to support ProVeg petition and message at COP23: https://www.youtube.com/watch?v=Wqab1tkq28o

ProVeg Submission to the UNFCCC Talanoa Dialogue to continue the conversation: https://unfccc.int/documents/64951

The demand for meat has a huge and devastating impact on the environment and is one of the world’s biggest contributors to climate change, responsible for 14.5% of greenhouse gas emissions.

Climate change is also a major threat to global food security, water availability, and biodiversity. This means that shifts in the way we produce and consume our food have enormous potential to have a dramatic effect on emissions, climate change, and food security. Opportunities to reduce greenhouse gas emissions in the livestock sector exist across all regions. They are some of the most powerful and effective ways we can achieve our climate targets and keep global warming below 2⁰C. Yet, to date, they have barely been discussed by world leaders and policy-makers. This needed to change, and our campaign aimed at bringing this issue to the attention of the public, the media, and the policymakers attending the UN Climate Change Conference (COP23) in Bonn, Germany in November 2017.

- In the European Union, halving the consumption of animal products would achieve a 25 to 40% reduction in greenhouse gas emissions.

- Global food-related emissions could be reduced by up to 70% by 2050 if everyone ate plant-based food.

- We currently produce enough food globally to feed 11 billion people, but over 50% of crops we grow are fed to animals raised for meat.

- Without significant dietary shifts, food-related greenhouse gas emissions in 2050 would use half of the total emissions budget imposed by the 2°C target and could exceed it by 2070.

There is consistent evidence that plant-based diets are less damaging to the climate than diets relying heavily on animal products. For example, producing 1 kg of beef releases between 16 and 30 kg of carbon dioxide into the atmosphere, while producing 1 kg of tofu releases only 1 kg of carbon dioxide. Replacing beef with beans would free up 42% of US farmland, achieve 75% of the US’s 2020 climate goal, and provide more than sufficient dietary protein.

Studies suggest that personal food-related carbon footprints could be halved with the adoption of a plant-based diet and that the worldwide adoption of a vegan diet could reduce food-related greenhouse gas emissions by up to 70% by 2050. Given that animal-based foods create more greenhouse gases and require significantly more land and other resources than plant-based foods, it should be concluded that shifts towards increasingly plant-based diets are a simple and effective measure to make a positive impact on climate change.

Potential exists for such interventions to dovetail with beneficial impacts on public health and environmental sustainability and protection, while also avoiding negative tradeoffs. Because this area is relatively new, even outside of the UNFCCC process, it offers an opportunity for Parties to explore new, creative strategies for bringing about demand-side food and agricultural changes, while acknowledging the work that has been done so far.

Many countries, cities, and civil society groups have already begun recognizing demand-side solutions as critical for climate change. To address the high consumption of animal-based foods:

- At the national level, several countries recommended reducing meat consumption for health and sustainability in their most recent dietary guidelines.

- Partnerships between NGOs and food service providers have resulted in procurement standards that emphasize purchasing (and serving) more plant-based food. 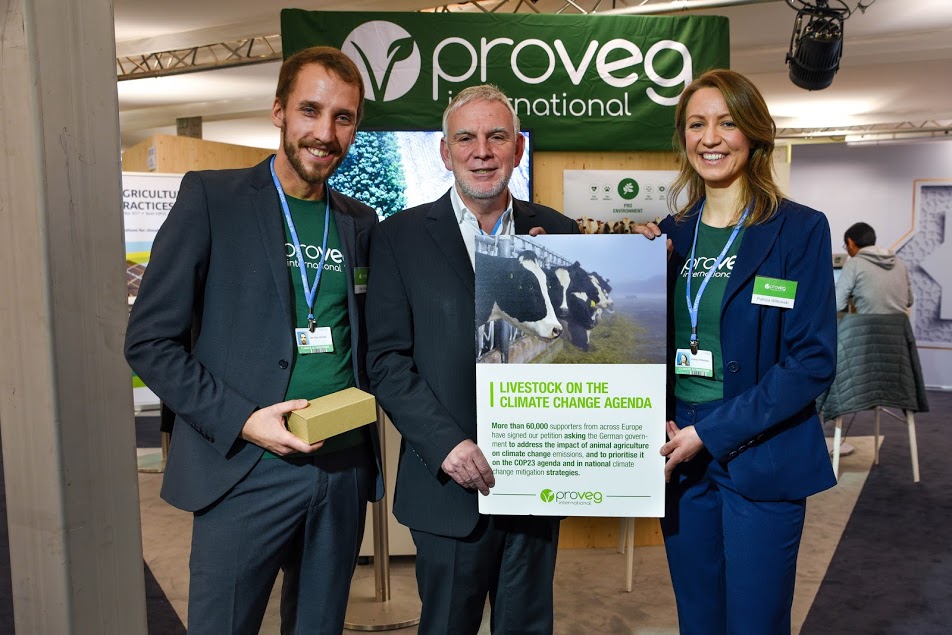