Some like it hot: science, jazz, and visual language for an effective climate change communication - Best Climate Solutions

To communicate more effectively the complexity of the climate change problem, “Some like it hot: science, jazz, and visual language for an effective climate change communication” brings together the scientific story behind climate change and the analysis of how we can address the issue, both individually and collectively. The conference show combines striking visual prompts, scientific animations, live music and videos to create an engaging yet structured and informative communication performance.

Seven live piano tracks from the soundtrack of Billy Wilder's film Some Like it Hot, which gives the show its name, and nine other jazz classics accompany animations that show the trends in the concentrations of greenhouse gases, the temperatures of the planet, the reduction of the Arctic sea ice, etc. (14 scientific animations, all available on the web, are used).

The texts and the screenplay of the show have been written and developed, show after show, by Stefano Caserini and Francesca Cella. The music is performed at the piano by Erminio Cella. Stefano Caserini, professor of Climate Change Mitigation at Politecnico di Milano, has a long experience in the communication of climate change; he is the author of numerous scientific and popular publications, as well as five books. Erminio Cella is a jazz pianist, keyboardist, arranger, composer and teacher of jazz piano, harmony, and computer music. He has participated as a pianist and musical director in various theatrical performances. Francesca Cella is a computer scientist, cinephile, and audio-video processing expert.

The duration of the show is 80 minutes.

Some clips of the show are available at the website www.aqualcunopiacecaldo.it.  A trailer is available at http://bit.ly/2g0LxUH

Climate change doesn’t communicate itself and engaging the general public on climate change can be challenging: people acknowledge the seriousness of the situation, but often do not want to learn more since the topic is disturbing and the communication is too technical, boring, abstract and intangible; or, on the contrary, too generic and simplistic.

The target audience is people with a minimal knowledge and/or interest (or even none at all) in climate change. This audience would normally not be willing to participate in a traditional science communication conference on climate change. Thanks to the light mood of the conference show, the visual language, and the music that provides energy and rhythm to the story, the audience is better convinced to attend the event and then engaged to face the climate change theme and its complexity.

Climate science provides nowadays many images, videos and scientific animations which combine extraordinary beauty with a large amount of scientific information. These products unfortunately often remain confined to specialist websites and do not reach the general public. The strength of the proposal is to mix cinema, theater, and music, combining the scientific story, which is inevitably worrying, with outstanding visual and audio contents, as well as a scientific, political and philosophical storytelling. Although many people know that planet is warming, the musical animations provide a striking depiction of the dimension of the ongoing changes and of the magnitude of the challenge of a rapid decarbonization of society. The scientific discourse is expanded to embrace the deep reasons that make it difficult for human beings to openly face the climatic challenge, based on texts taken from philosophers such as Harry Gordon Frankfurt, Dale Jamieson, and Slavoj Žižek.

Numerous studies have shown that one of the preconditions for the involvement of people in the fight against climate change is to understand not only the scientific basis but also its ethical and political dimension. The conference-show deals with both the explanation of the climate change problem and its impacts and the actions that can be undertaken individually and politically. For example, the conference show presents examples of media disinformation on the topic, as well as discusses the need to halt investments which further expand the fossil fuel industry.

The warmth of jazz music, some well-dosed irony and the images of Marylin Monroe provide the background to understand how urgent the climate issue is, stimulate a reflection on how we deal with ecological issues in our daily lives and allow the audience to better approach climate change’s crucial ethical dimension.

The audience of a show can vary from a few tens to hundreds of people. The conference-show has already been staged in 16 different locations in 13 Italian cities (Lodi, Milano, Mormorola, Pollenzo, Frascati, Trebaseleghe, Sesto San Giovanni, Legnano, Terni, Cesenatico, Bolzano) and has been seen by thousands of people.

The free availability of the texts of the show (also for translation into different languages) and of the scientific animations (downloadable from the web), make the show replicable in all countries by very different people. The staging costs are very low and the show can be adapted to a wide range of contexts. The ideal staging is in theater, with a grand piano, professional audio-visual systems, and stage lights. However, representations in less equipped settings are both possible and effective.

Name: Some like it hot: science, jazz, and visual language for an effective climate change communication
Category: Mitigation & Emissions reduction
in one sentence: Mixing scientific animations, striking visuals, jazz music, and technical and philosophical arguments to communicate the urgency of the climate change problem in an effective, rigorous and exciting fashion 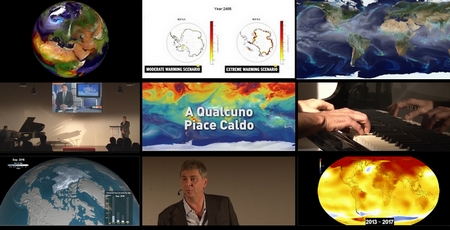