The Energy Transition Game (ETG) is a role-playing social simulation (that is, a multi-player serious game with a focus on direct interaction among participants) developed to engage a wide group of stakeholders in experiencing social, economic and environmental challenges of transition from fossil fuels to renewable energy sources. Its aim is to highlight the human negative impact on climate and to stimulate discussion on sustainable growth. ETG combines the elements of systems analysis and simulation techniques with creative group scenario building, role-playing and communication enhancing methods. The reality in ETG is simulated via the interaction of roleplayers and the use of game elements (boards, tokens, cards). As a result, ETG offers a realistic representation of a human-nature system in which energy obtained from nature is essential to ensure the wellbeing of the citizens. During the 6 hour-long simulation, 12-30 participants enter roles of various actors taking part in the transition process (e.g. energy producers and providers, technology start-ups, ministries or NGOs). Each role has different agenda, objectives, and understanding of the problem. For example, energy producers may seek to maximize their profits without any regard for the environment, which can result in climate-related disasters. Meanwhile, technology start-ups can concentrate on introducing renewable energy production technologies to the market. However, the innovations may not necessarily be as effective as expected due to outdated infrastructure that has to be fixed by the underfinanced government. All these, and many other, interactions create a complex system of connections and dependencies. ETG mirrors the most important features of the real world and highlights the need for collaboration and communication. Furthermore, it presents real-life issues connected with energy transitions–financial problems, the importance of adapting infrastructure to new inventions, and the results of mismanaging this process.

With growing climatic risks and scarcity of fossil fuels, most of us realize the urgency of transition into renewable energy. However, little is known about how to handle this task fast, effectively and – most importantly – globally, across different economic political and ecological systems. The practice has shown that the system-wide transitions entail many interdependent challenges (blackouts, excessive energy production, taxpayers’ protests, etc.) and thus require coordination and cooperation between many actors. ETG has been developed to highlight this need of more coordinated and integrated action towards climate-smart, low-emission future and to engage a wide range of beneficiaries (developers, innovators, business operators, researchers, policy-makers, students) in this process. However, as ETG presents general challenges of system-wide change, it can be used in various other contexts where transformations are needed. It may also be a valuable tool in education on transition theory.

ETG is connected with transition theory. It enables participants to try various strategies of introducing system-wide changes and to handle the complexity behind developing and introducing new technologies and ideas, and making them competitive to the mainstream solutions. ETG offers a multi-level perspective on the transition process. It presents how current business practices, fixed on producing energy from fossil fuels, are resistant to change. Furthermore, it shows how the system approach helps to understand that it is not only the problem of energy producers but involves also other actors, which are all interconnected and dependent on each other. Last, but not least, participants can try how various actors and their agendas can help in introducing a transition into a new regime or slow it down. All of these lessons can be learned in an interactive, fun and safe environment that encourages experimentation, critical thinking, and engagement: https://www.youtube.com/watch?v=-p3p9VBQ0K0&t=35s

Since its development in 2016, ETG has been repeatedly used within national and international projects and programmes supporting renewable energy transition in Poland, Estonia, Germany, and the Netherlands. It has been played i.e. by the workers of the German Ministry of the Environment and the members of the Humboldt Climate Protection Fellowship. The participants praised the tool, stating that it enabled them to gain a more holistic picture of the transition process and the myriad factors that influence stakeholders’ choices. According to them, the simulation makes a perfect awareness-raising tool and has a big transferability potential, as the knowledge and practical skills gained via “gaming” may be easily applied in real life, to establish a network of sustainable professionals and practitioners and for further promotion of technological innovations aimed at climate change adaptation and mitigation.

So far, the ETG has reached more than 200 people in less than 2 years. The Centre for Systems Solutions is constantly running ETG-based workshops for people interested in transitions within the energy sector in Poland and abroad. We are also running workshops for moderators, equipping new people with knowledge and skills to independently use the simulation in their own contexts. In the near future, the game’s materials will be ready for self-print on the simulations’ website: https://energytransition.socialsimulations.org/en/, which will definitely help us reach an even wider audience. 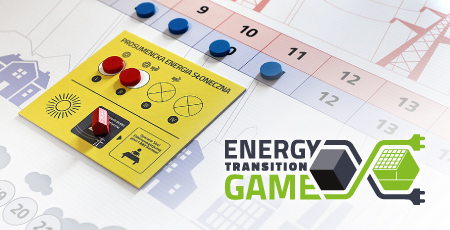