The aim of the Climate Art Project (www.climateartproject.com) is to raise the public awareness of the climate change causes and consequences and possible best climate solutions.

Part of the Climate Art Project is the CLIMATE initiatives, a series of big scale artistic interventions that took place in different European cities. All the artistic initiatives are inspired by the scientific and social studies about climate change. The project started in November 2015 during the COP21 in Paris and subsequently continued in Bologna, Bari, Venice, Berlin, and Rome. The Climate project consists in the realization of various site-specific interventions, including installations in the urban space, wall paintings, shows, and lectures which aim to create a connection between science, ecology, and art. This dialogue translates the latest scientific researches on the causes and the effects of climatic changes into the works created.

Usually, the project is made by a big wall painting used for pointing out the problem, an installation showing possible solutions, as well as talks and seminars which analyze climate change under a scientific and artistic point of view.

As Example: The Climate 04-Sea Level Rise project chose Venice as a symbol, the city being of one of the most exposed to this kind of risk and potentially destined to be submerged, according to the majority of current forecasts. The site-specific intervention took inspiration from some international researches led by IPCC, Delta Committee, WGBU, CMCC, and from articles published by the professor Rahmstorf and the researchers of the CNR-ISMAR about the effects of the sea rising in Venice lagoon.

The mural was made at the Venice Train Station on the Grand Canal, and represent an artistic translation of the studies about sea level rise and extreme waves, according to the scientific evidence and estimates provided by research centers involved in the project.

The aim of the Climate Art Project (www.climateartproject.com) is to raise the public awareness of the climate change causes and consequences and possible best climate solutions.

The Climate project underlines the weaknesses of the territory where the individual intervention takes place, i.e. in Bari, the main theme was the accelerating desertification caused by the temperatures rise; in Bologna, the focus was air pollutants and the greenhouse gasses; in Venice, I focused on the sea level rise.

The beneficiaries are the people that live in the location of the intervention and all the people with an internet connection.

It is a new, innovative way of communicating that touch the deep emotion of the people.

Potential of viral communication through the Internet.

It is developed near the local citizen and involves the people.

It is a vision.

The Project is itinerant and scalable, it can be applied in all the cities and the rural areas affected by climate change or related issues. 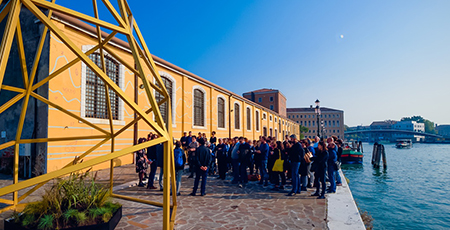