The practice “Carbon Finance for families in Mozambique” aims to improve the living conditions of needy families, by distributing efficient cookstoves financed by the revenues from the generation of carbon credits. The practice will enhance climate change mitigation, by reducing the charcoal burning responsible for CO2 emissions. The practice has started as a pilot project and has increased in size and fruitfulness over time.

During the starting pilot phase of the practice, in 2014, CarbonSink has registered three Gold Standard cookstove projects. Gold Standard is one of the most known Carbon Standard to certify carbon credits in the voluntary market. All of the projects were implemented in urban areas in the capital city of Mozambique, Maputo, and altogether they have included the distribution of 5,000 improved cookstoves in the quarter of Chamanculo C during the years 2014−2015. The implementation of the project in the field including the stove distribution and monitoring activities were conducted by an Italian NGO, called AVSI Foundation. The area of Chamanculo C is characterized by severe social and environmental issues, including high population density, lack of basic services and a high density of inefficient charcoal stoves used for cooking activities. With the replacement of the inefficient cookstoves, the projects are aiming at promoting energy efficiency, conserving natural resources and improving the population living conditions.

Encouraged by the successful results achieved by the Gold Standard pilot projects, CarbonSink took a further step, developing and registering a Clean Development Mechanism Program of Activities (PoA), according to the Kyoto Protocol and covering the whole country of Mozambique. This PoA resulted as a remarkable achievement since it is the first and only Clean Development Mechanism cookstove PoA ever registered for Mozambique. Under this PoA there are currently 3 ongoing cookstove projects, including the distribution of 10,000 improved stoves.

Essential support for the implementation of the project under the PoA has been given by the Nordic Environmental Finance Corporation (NEFCO), which has committed to buying all the carbon credits achieved by one of the projects, guaranteeing financial support to the continuation of the activities in the field. The credits bought by NEFCO will be used for compensating part of the emissions of Norway under its commitment to the Kyoto Protocol.

The last step taken under the Clean Development Mechanism scheme is represented by a new cookstove project implemented in the city of Pemba (Northern Mozambique), which is currently under the validation process. This project will include the distribution of 6,500 sustainable stoves, in part locally made. Therefore, through the local capacity building of the population and the propagation and transfer of technology, a further positive impact is added to the practice, contributing to rising the local know-how.

The project is implemented in one of the poorest suburbs of Maputo, the capital city of Mozambique, and in the city of Pemba.

The cookstove model used in this project is one of the most efficient cookstoves in the world, and it can save up to 50% of the charcoal compared with the traditional charcoal cookstoves currently used in the area. Thanks to this innovative technology, families are saving money, as less charcoal is needed to be purchased, releasing important economic resources for other purposes.

In addition to the direct economic savings, the use of the innovative cookstoves brings several other benefits: environmental, social and economic benefits. One of the major benefits is greenhouse gases reduction, achieved by the decreased use of charcoal produced with non-renewable biomass.

Other significant co-benefits are the reduction of the deforestation rate caused by the charcoal production, and the improved air quality in the domestic environment as less charcoal is combusted for cooking purposes. The combustion of charcoal causes smoke emissions which are responsible for causing high number of respiratory infections, especially within women and children. At the economic level, new job opportunities have been created for stove distribution and reparation activities as well as for the project monitoring activities.

The beneficiaries of the practice include the entire local community, involving economy, environment and health, starting from local families up to the local stakeholders.


Strong points of the solution

1. Benefits are both environmental and social.

2. as one of the most interesting mechanisms in developing countries; in fact, the generated credits have been bought by NEFCO at a higher price, compared to the current value of the market.

3. The evident scaling up of the project during the course of the years confirms its strength and possibility to be replicated in other areas/developing countries.

4. The diffusion of good practices and the building of local capacity to construct efficient stoves are important points, in line with the idea of technological achievements in developing countries, and for the population to become autonomous in the future.


Expected results and benefits for climate change adaptation and mitigation

• Up to 50% of savings in the charcoal consumed for cooking

• Up to $ 190 yearly of savings for local families

• Reduced cooking time, which will allow more time to be spent on other tasks

• Reduction in GHG emissions, both during the cooking activities as well as during the charcoal production, as less charcoal is needed to be combusted and produced.

• Reduction of the deforestation rate caused by the charcoal production.

• Time savings as less time is needed for both fuel purchasing and cooking activities. Women can spend more time in other domestic tasks such as education and upbringing of children.

• Reductions of the negative effects caused by the deforestation and charcoal production activities on population.

• Poverty rate reduction: greater financial resources due to the lower annual expenses used for the purchase of charcoal.

• The recruitment of locals for the distribution of the new cookstoves.

• Reduced burns and injuries caused by the exposure to open fires.


Scalability potential of the solution

The practice has a very high potential of replicability because the technology used for the cookstoves is not tailored for a specific developing country (i.e. Mozambique in this case), but it may be easily diffused and spread around other countries where GHG emissions are high and strictly related to the local habits in food cooking.

Moreover, the generation of credits through such type of projects (where health, environment and social aspects are strongly connected) contribute indirectly to the potential of replicability of the practice, because it rises the interest in buying the credits by any potential buyer (i.e. NEFCO in this case).

[Editor's Note: All information published as submitted by the author(s). Minor edits may have been made to increase readability and understanding.]

Name: Carbon Finance for families in Mozambique
Category: Climate Finance
in one sentence: 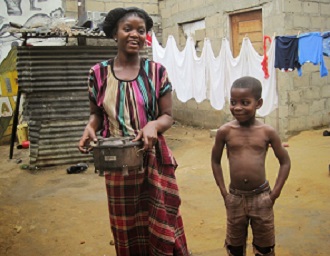